New Zealand is facing a mental health crisis. The system is a messy and disorderly mix of DHBs, NGOs, and primary care providers all struggling to be part of a coordinated response. ACT would create a separate, stand-alone Mental Health and Addiction agency on a national scale, which would empower patients to choose between a range of providers, rather than simply accept what their DHB offers.

Each year, the Government spends about $1.5 billion on mental health and addiction services. Budget 2019 announced that a further $1.9 billion would be spent (over five years) taking total expenditure to $2 billion per year. In spite of this expenditure, almost nobody is satisfied with the state of mental health and addiction services. Our youth suicide rate is the darkest statistic in New Zealand. Sadly, suicide is the one area where a country that’s used to leading the world in many areas has the worst record.

Our current mental health settings are a combination of an outdated focus and general confusion.

After deinstitutionalisation in the early 90’s, the Mason Inquiry called for three per cent of the population most in need to be covered by specialist services. That goal has been achieved, but the system is a messy and disorderly mix of DHBs, NGOs, and primary care providers all struggling to be part of a coordinated response.

People who seek treatment describe a complicated system difficult to navigate, postcode lotteries, and a lack of choice in services and resources to suit their individual and community needs.

NGOs voice concern about a lack of ‘level’ playing field, genuine partnership, and a power imbalance as DHBs favour their own provision of services over alternative community providers.

Meanwhile, attitudes to mental health have shifted massively during the 21st Century. Good mental health is seen to be as important as good physical health, and there is less stigma attached to talking about it. This reflects the fact that the number of people accessing mental health and addiction services has grown 73% over the past 10 years.

Around one-in-five New Zealanders face a mental health challenge in any given year, and as many as four-in-five throughout their life. There is a need for a continuum of services that matches the continuum of need.

Too Important To Keep Failing

Mental Health service provision is too important to keep placed in the hands of the ailing DHBs.

To some extent, mental health service provision is a victim of the same fragmentation and inconsistency of standards that comes with the ailing DHB model. Independent reports, political parties, and the Government itself have attempted to rescue different health objectives from the problems of DHBs with suggestions such as a national cancer agency or a separate health funder for Maori.

We need an approach that will solve the big problems identified in the Government’s 2019 Mental Health Inquiry He Ara Oranga.

Some of the biggest problems identified are:

The Government has established a Mental Health and Wellbeing Commission to provide system-level oversight of mental health in New Zealand. However, it does not have real power to change the fundamental problem of lack of choice in the system and the need for one clear, nation-wide approach to tackling poor mental health and addiction recovery.

ACT would give the Commission real power to transform Mental Health and Addiction service provision in New Zealand by taking the $2 billion per annum currently spent through the Ministry of Health and DHBs, and channel it to providers of care, and ultimately patients, through an upgraded Commission.

It would be renamed Mental Health and Addiction New Zealand (MHANZ).

Crucially, Mental Health and Addiction New Zealand would not be a provider of services in its own right. It would be a world-class commissioning agency that assesses individual need and contracts the best providers for a person’s therapy and care.

It would put people at the heart of mental health and addiction care in New Zealand by giving more autonomy and empowering people seeking help to have a service tailored to what they need to manage their mental health or addiction.

MHANZ (Mental Health and Addiction New Zealand) would be the one central interface for mental health and addiction funding across New Zealand, reducing bureaucracy and administrative burden. It would develop expertise in evaluating where the money is going, to whom, and what services work based on evidence and data. It would issue clear and certain contracts to service providers while keeping a keen eye on outcomes and quality of provider care.

Any provider, meeting strict criteria, would be able to register with Mental Health and Addiction New Zealand to provide treatment and care, and funding for services would be determined by and attached to the care of individuals and their needs. MHANZ would carefully monitor providers to ensure New Zealanders are receiving high quality care.

A person needing help would be able to choose any registered provider for their immediate care, giving autonomy to the person reaching out for help, or be referred to a specific provider by MHANZ in cases where a person lacks the capacity to do so or requires specialised treatment.

For example, a person would have the choice to seek help from providers who offer treatment in specific cultural contexts, languages, or regions, or be selected a treatment provider by MHANZ directly based on information supplied.

Besides registering and contracting providers, MHANZ would play a role in helping individuals and providers assess an individual’s level of need, ensuring help is going to those who need it the most. Schools, GPs, Oranga Tamariki, Corrections, Ministry of Social Development, and Police would be able to refer people for treatment, work with MHANZ for assessments, and be involved in wrap-around care where it is in the best interest of the individual.

MHANZ’s interface would be simple, user friendly, and the only information needed for mental health and addiction services nationwide. 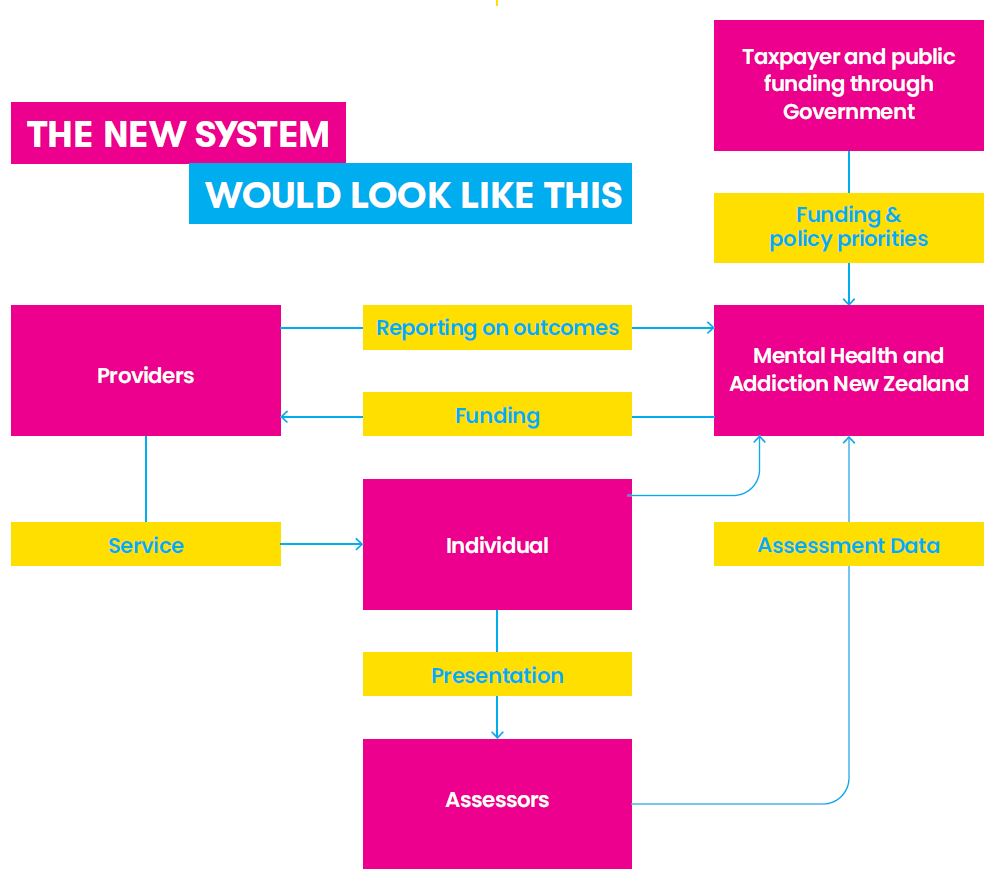 Recommendation: Put people at the centre.

Where We'll Get To

The Government’s Mental Health Inquiry painted a picture of an outdated system that is overly complicated trapped in a paradigm where Mental Health is seen as an acute issue for three per cent of the population. It has responded with more money but increasing funding will not guarantee improvements for people’s care. It does not address the issues of choice, accountability, or getting better value for the mental health dollar or the individuals and communities being served.

We can do better.

MHANZ will register and contract a range of appropriate providers so that individuals will have real choice in the help they receive. In the background, MHANZ will become an expert in setting contracts that are reliable and low cost in terms of administration, but provide MHANZ with good evidence based data on what works, where, and for whom.

Creating a separate, stand-alone Mental Health and Addiction agency on a national scale also solves two other problems. It is a clear statement that our thinking as a nation has evolved. Mental Health and Addictions are not to be stigmatised or swept under the rug, they are issues to be put front and centre with their own funding agency on an equal standing with general healthcare. It will avoid postcode lottery syndrome, where the level of care an individual receives is dependent on the competence and priorities of their particular DHB.

Over time, MHANZ will use its expertise and patterns of data to drive better performance from the sector, making sure that the Mental Health Dollar goes further. Our friends overseas will come to New Zealand to ask, ‘how does this system work, how did you do it?’ and we will be proud to tell them.