“The Government needs to explain why the number of prisoners attending rehabilitation is decreasing while disorder increases,” says ACT Leader David Seymour.

“The number of prisoners attending rehabilitation programmes has fallen from 49 percent to 41 percent. We should have an expectation that Corrections will do everything it can to ensure prisoners are working to become better members of society while they are serving sentences.

“Information released to ACT by Corrections Minister Kelvin Davis shows the cost per prisoner has risen by 54 percent in four short years, from $124,461 to $191,463 per year.

“If taxpayers are forking out almost $200,000 a year on each prisoner, they should have the knowledge that they are undergoing some sort of rehabilitation to become better members of society.

“For every person behind bars there is also a victim of crime. Victims deserve the knowledge that offenders are taking part in rehabilitation.

“ACT believes we should reward prisoners who complete literacy programs and driver licensing tests with reduced sentences, and do the same for prisoners who volunteer to teach in these programs.

“We need a fresh approach where people will improve their lives while they serve sentences, leading to a reduction in recidivist offending and fewer victims of crime.

Answer to the Written Parliamentary Question:

Number and percentage of people who have attended a rehabilitative programme during their sentence between 2016/17 and 2019/20, broken down by year. 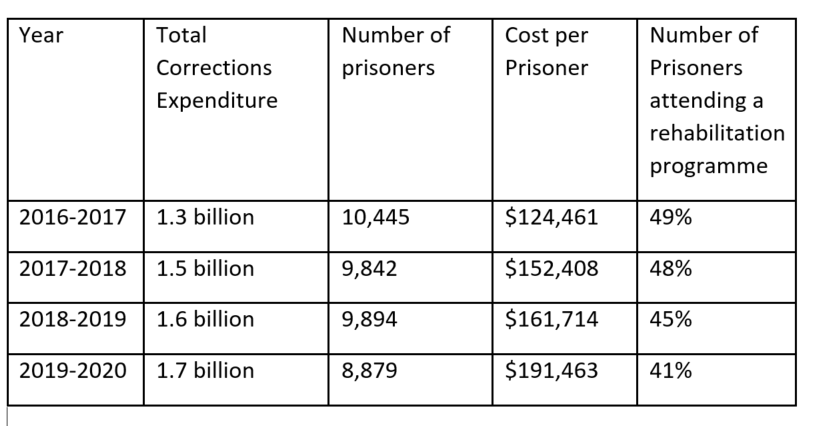