Dare To Be Different

This week, ACT’s election campaign officially kicks off at Dare to be Different. We’ve now sold more than 500 tickets. This event will sell out. If you’d like to hear from our exceptional new candidates, meet other supporters from around the country, and be a part of our growing movement as we head into the most important election in a generation, please secure your space here.

The Power of Government?

As student politicians, Jacinda Ardern, Grant Robertson and Chris Hipkins fantasised about the essential goodness of state action. It hasn’t quite worked out that way. The Government has had high-profile failures in housing, infrastructure and child poverty. But the government failures at the border are even more damaging. Even with three months and 1,163 health bureaucrats at its disposal, our government hasn’t been able to figure out how to separate passengers from two different planes if they land around the same time. We wish we were making this up.

Restricting Kiwis from coming home shows our borders are far from the world’s smartest. The Government still hasn’t managed to get the basics right. On the AM Show yesterday, the PM said the Government hadn’t managed to establish a travel bubble with the Covid-free Cook Islands because she hadn’t spoken to that country’s Prime Minister in two weeks. Airports, she says, can’t sort passengers from safe and unsafe countries. If the Government can’t establish a travel bubble with what is essentially a Covid-free part of New Zealand, when will we have the world’s smartest borders?

Helen Clark’s broadside of her protégé is extraordinary. Normally, former Prime Ministers stay out of the public debate, but Clark has co-authored a paper with Rob Fyfe and Sir Peter Gluckman which raises questions about how we reconnect with the world safely. Is eradication worth being isolated from the world for three years? Can we afford that? If we’re prepared to accept some Covid-19 cases are inevitable no matter what we do, does the Government have the testing and contact tracing capabilities to deal with it? Should we allow user pays, privately-run managed isolation facilities to house seasonal workers and students? Can we allow passengers to provide data from GPS-enabled watches to reduce the amount of time spent in managed isolation? Do we create green lanes for our Pacific neighbours? Can we model the risks of travellers coming here and treat them differently based on risk?

Far from being transformational, Labour has quickly realised the limits of what governments can achieve under its direction. The Government must do the core job of public health well, and set clear rules of the game so private sector and other organisations can assist. The Government has a range of options for creating smart borders and allowing New Zealanders to start reconnecting with the world safely. If we are to live resiliently in a post-Covid world, the Government needs to be more proactive in setting clear rules and engaging with the private sector.

The Politics of Fear

Instead, the Government is using the politics of fear, labelling any discussion about reconnecting with the world as ‘dangerous’, and using blunt measures to keep New Zealanders compliant. Instead of preparing New Zealand to live resiliently in a post-Covid world, it is avoiding any risk in case it jeopardises its election chances. The Government is so focused on winning the election, it is locking down the country at all costs. And the costs of failing to reconnect with the world are sky high. It’s worth remembering that the Minister in charge of the border, Megan Woods, is also running Labour’s election campaign. Right now, the Government is governing for Labour, not the country, and New Zealanders are paying for it.

Following the release of ACT’s 5-point economic plan in May, Labour produced its own over the weekend. Free Press is glad Labour has taken the ‘5-points’ idea, but we really wish it had adopted our vision. Simply throwing money at our problems, as Labour proposes, is like treating a broken bone with a band-aid. ACT’s 5-point plan will grow the economy and employment opportunities, cut taxes, red tape and the cost of living, invest in public health and innovative technology at our border, embark on an ambitious programme of pro-growth reforms, and leave less debt for our kids.

Labour's slogan this year is "Let's keep moving". You can give them a hand moving out of the Beehive on 19 September by donating, volunteering or joining ACT this year. 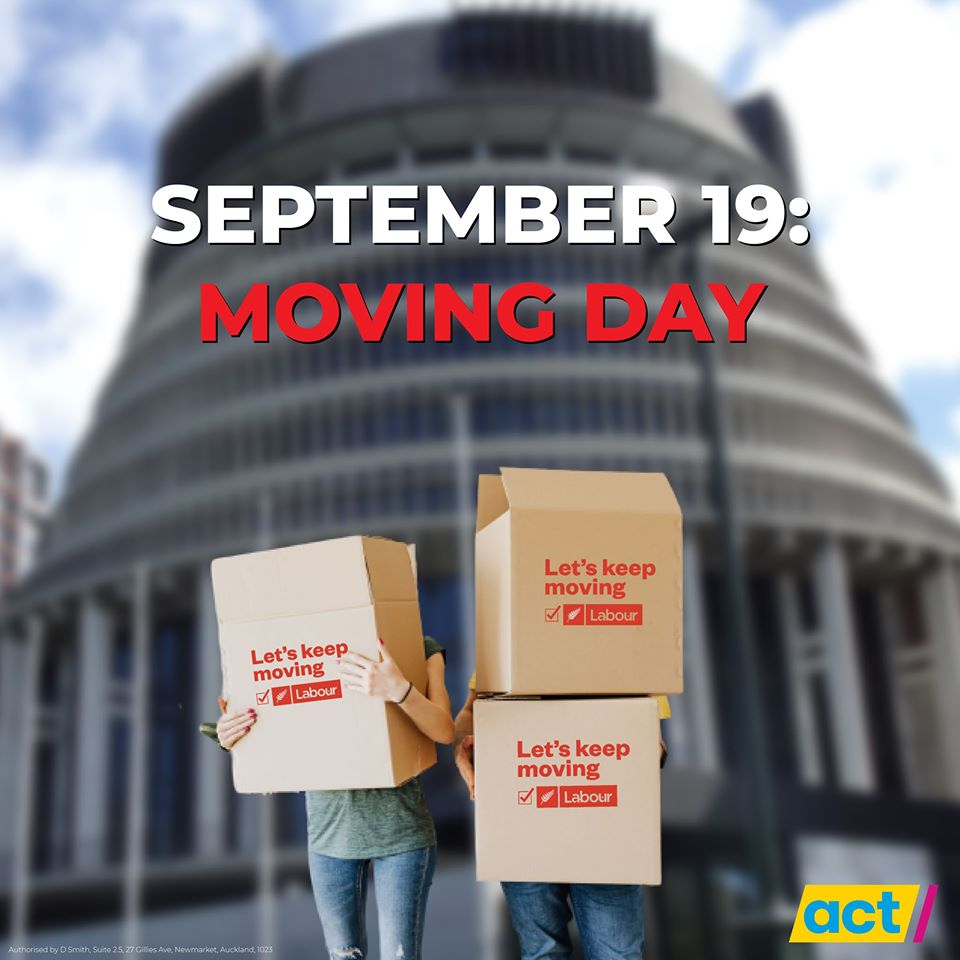