Armed with only Parliament’s Standing Orders, Brooke van Velden has succeeded where nuclear powers have failed. She’s made Labour take a clear position on China. Either they will support her motion condemning genocide in Xinjian, or prevent it being debated, as would sadly now happen in Hong Kong. Meanwhile ACT continues to fill halls up and down the country as the free speech tour rolls into its third week.

What does the Treaty mean?

Parliament is back this week. When it last sat, David Seymour asked the Prime Minister which parts of the report He Puapua should be taken seriously. Are we just here to stop charging rates on Maori land, or on our way to having a Maori parliament? 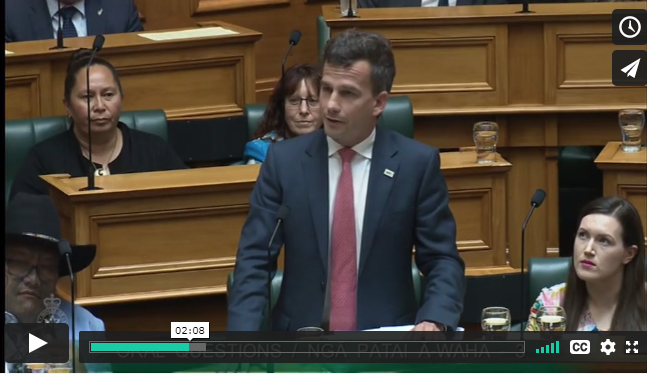 The Prime Minister ruled out that last one, but now her Government is suggesting a co-governed healthcare system. An age-old debate needs airing again: What does the Treaty really mean? There are two answers.

The first and most fashionable, for now, is that there is a partnership between two collectives. Everything should be co-governed in partnership. ‘Don’t read what it says,’ they say, ‘look at what happened. Two groups got together and made a partnership. What’s more, one group never really gave up sovereignty, so must have the exalted position of mana whenua. They will have one status, everyone else will have another.’

The upshot is that who your ancestors were matters more than who you are, let alone what you do with your time on earth. Rather than each person having inherent freedoms and dignities, what matters is which side of the partnership you hail from.

The alternative is what the document actually said. Specifically what the Maori version said in modern English. The Queen would give ‘all the people of New Zealand in the unqualified exercise of their chieftainship over their lands, villages and all their treasures,’ and ‘all the ordinary people of New Zealand and will give them the same rights and duties of citizenship.’

The issue is not about race. It is not about Maori vs Pakeha, as some people would like to make it. It is about which vision is more likely to give every child born in New Zealand real opportunity.

The record of human history is crystal clear. Societies that are free an open, where every person has the same rights and duties, the same dignities and freedoms, are places of human flourishing. In fact, most New Zealanders are here to escape oppression.

Now we find ourselves in the bizarre situation of being the freest society in history, that is desperate to create a two speed society. David Seymour summed it up in his 2014 Maiden Statement:

We have moved towards the light of liberty by removing distinctions in law that once treated people differently depending on their religious conviction, gender and race. Most recently, this House decided to remove sexuality from the Marriage laws.

Many countries have never achieved that. But it is extraordinary that, as if engaged in some form of historic shuttle run, we who were first to touch the cone are now rushing back to create new distinctions in law.

I refer to those who claim that the only way to achieve material equality between the Maori side and the British side of my family is to create more legal inequality. No doubt they have noble intentions but public policy should be measured by results.

That, at its most basic, is the honest conversation New Zealand needs to have. We need to be united behind better ideas. The idea that each person has the same rights and duties is a far better idea than your identity deciding your rights.

We live in the most extraordinary time when many people feel afraid to state the obvious. Having Maori ancestry does not make you special, it doesn’t make you ‘mana whenua.’ No, you’re just another person entitled to one five millionth of the opportunity this country has to offer. All humans share 99.9 per cent of the same DNA, it is time to focus on our common humanity rather than constantly looking for new divisions. Our goal as a country should be equal rights and equal opportunity.

That such an obvious statement may be controversial shows how far New Zealand has drifted from the ideals of a free society.

Our annual Rally Honest Conversations is on track to sell out. You can get your tickets here.