My piece on defence of vaping received mixed responses last week.  I had no idea at that time that I would be invited onto the weekly ACT podcast Politics in Full Sentences to discuss the very topic with the co-founder of VAPO and Alt NZ, Jonathan Devery.  In this episode, Jonathan explains why they do welcome some regulation of the vaping product industry.  This topic is custom made for us.  It’s about minimal regulations, freedom, choice, and personal responsibility – in this case for one’s health.

If you’re not convinced that bans could lead to unintended consequences, do watch it. The benefits of providing an alternative to smoking for those who are finding it hard to quit, compared to the risk of small numbers of young people allured into taking it up, are far outweighed.

How is it that so many young people feel the weight of the world on their shoulders?  Is this part of the reason for the high rates of youth suicide and mental illness?  Why aren’t more young people feeling excited about the future, the scientific discoveries they’ll witness in their lifetimes, the advancements in technology, and the exploration of sea and space?  Why aren’t there more celebrations of scientific breakthroughs in medicine, or conservation success stories, and fewer protests demanding something, or someone else, change?  I’d like to see more school-leavers taking up study and careers in science, medicine, research, agriculture, genetic engineering, immunology, and the like – in this way, they will see themselves as part of the future solution to many of the things so many of them seem so worried about.  Dare I say that perhaps there’s a bit too much philosophy and art being studied which always seem to be very inward-facing, unproductive, and quite frankly, depressing.

With all the doomsday predictions, I have been looking for a bit of light relief. Who knew that this episode of the Simpsons contained something so prophetic?

I’m also not sure where I stumbled across this during the week, but I was listening to David being interviewed by a radio station and they asked him what his favourite song was. The theme of the interview brought the following song to mind, and I must say it fits perfectly right now. Sure we’ve got 99 problems, but one of them ain’t hope or lack of solutions. Enjoy, and spot the cameo by one of our founding fathers.

Now here’s something oddly funny, but potentially expensive, sent to me by a reader:

“A TVNZ reporter attempts to make a puerile statement about democracy by lodging a nomination for the mayoral contest in MacKenzie Basin.  He fails to withdraw his candidacy before due date, and forces a mayoral election upon the MacKenzie District Council constituents, and the costs thereof, says he won’t take office if elected, thereby forcing a by election and further associated costs.”

And he’s not the only one!  Whakatane District Council candidate Kay Boreham says “don’t vote for me” after inadvertently completing the wrong nomination form.  She had intended to stand for the Whakatane-Ohope Community Board.  Unfortunately, I think Ms Boreham has also ruined her chances at any future run for community board.

Unlike our Fiona in Auckland, who stood deliberately albeit after drinking too much wine after Dry July, the above two candidates pose a real threat to ratepayers.  But alas, even Fiona has not been immune to making a bit of a cock-up.

Finally, here’s Trevor Mallard tweeting two and a half years ago about Parliamentary broadcasting rules, and defending images like this one.  (Hat tip to National Party Meme Working Group on Facebook.) 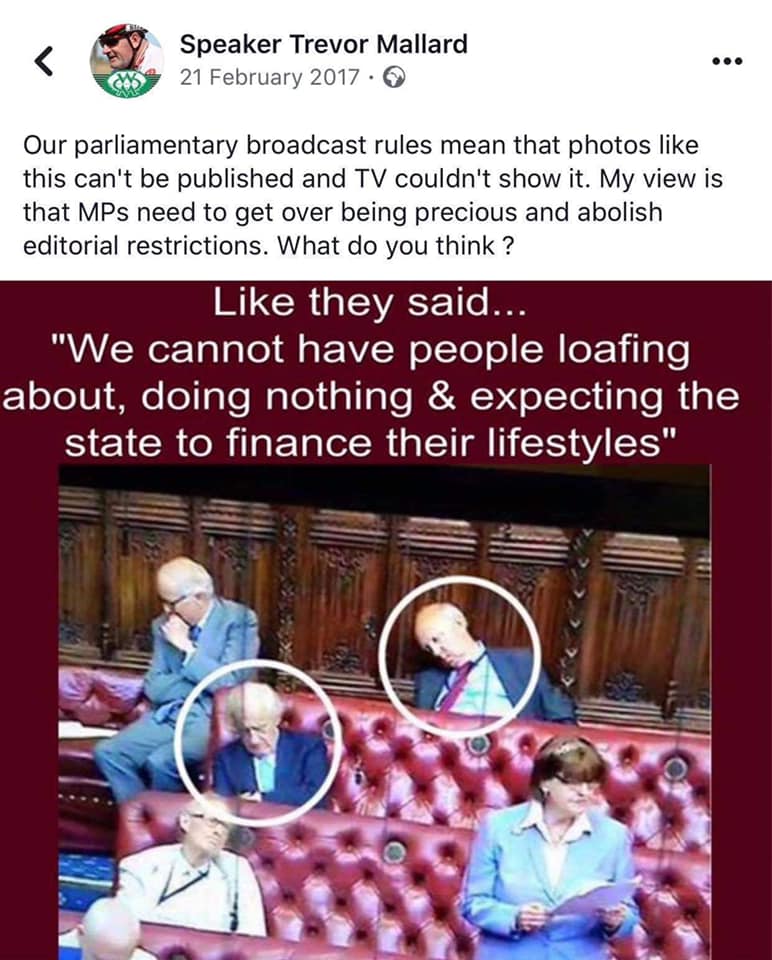 Have an enjoyable and productive week.