What an incredible week. A sole MP of one political party has made history by bringing one of the most difficult social dilemmas to Parliament to be debated over a four year period, and won, at least to be able to bring End of Life Choice to a referendum in 2020.

The accolades have come from far in wide including from some unexpected places, but David would be the first to acknowledge that many others have also worked behind the scenes. This write up on Brooke Van Velden, one of our parliamentary staffers, is almost unprecedented.

I am so proud of the calibre of people we have in our team.

Some things get right up my nose as soon as I see the headline, and this was one of them. For what “no reason” would any landlord ever have to evict a tenant? What landlord wants to have a vacant rental property? And whose business is it anyway?

"Most landlords, including me, aim to have every property we own rented out for every day of the year. We don't go throwing people out for no reason. There's actually no such thing as a no-reason clause. It's a no-stated-reason clause. You don't have to give a reason."

Let’s face it, among all the great tenants out there are a handful who do not treat their rented home as their own. If they did, they wouldn’t trash it, or be careless about ventilation, or forget to report problems like persistent mould before it became a health hazard, or might even have a bit of pride about the lawns and outside appearance of the house.

It costs nothing to keep a place tidy, to take the flyers out of the mailbox, or open the windows, and yet I can only imagine challenging a tenant to fix these sorts of issues on a regular basis, would be met with hostility.

Therefore even at 90 days the “no reason” might simply be that a landlord does not want the relationship with their tenant to deteriorate, and confronting them with the real reasons might escalate into hostility and further property damage. 90 days is plenty of time for a tenant to find another rental, and to clean up the property they are renting so that they can obtain a good reference to present to a future landlord.

Stop making landlords out to be the bad guys. All it will do is make it harder for tenants to find a rental as landlords will put a much higher bar on screening, and there will be fewer rentals around as landlords get out of the game, because, who needs it? The ROI is not great, probably in the negatives, and often the only motivation for investing in rental property is for the landlord themselves not to be entirely dependent on taxpayer handouts in their retirement.

Let’s face it, the number one issue facing renters is the high cost of housing, and all this tinkering with rental laws is not going to address that. The most fundamental and important change we can make to make housing more affordable is to replace the Resource Management Act which has driven up the cost of housing exponentially over two and half decades. What is needed is bold and brave reform, and only ACT has the kahunas to do it.

I’m a boomer (and I’m OK), and was one who built a house at age 21, before so many of the current regulations came in. While many will try to make the argument one of blaming either the boomer or millennial generations, it is successive governments who have made the situation worse by introducing and then failing to improve, the RMA. It is indeed much harder to build a house now than it was thirty plus years ago, in fact I rarely hear of any first home buyers even contemplating a new, modest build.

Damien Grant summed it up nicely in this one sentence from his scathing piece in the Sunday Star Times.

"Boomers could afford houses because they and their parents built them. We built more houses in the 1970s than we do today. In the insulated, protected, cotton-wool safe-space hyper-regulated world that today's young pretend-adults like to live, building and land-use regulations make knocking out cheap houses uneconomic."

It’s also good to read a millennial putting things in perspective too.

I had a very positive reception at the Dargaville rally by Uniting Rural NZ where I spoke, and have subsequently blogged. The number of people who came up to me and said they were giving their vote to ACT next year was encouraging for us, but an indictment on those parties they had previously supported and felt so let down by. One of the most profound takeaways I had from that event was the link between farmers being villainised and mental health. There is a shocking farm suicide statistic of one every 10-12 days. It saddened me deeply to hear that our once proud farming community were no longer held in high esteem, feeling they have to be apologetic for their choice of livelihood in social and business situations, because of misconceptions that they are responsible for all that is wrong in the environment. Where is the pride in our people who work the land so we have something to eat, and export?

There’s just over a week to go before David and I appear on the Freedom to Earn tour in my own hometown of Warkworth. The event is being co-hosted by the One Warkworth Business Association and is at Warkworth Bowls in Mill Lane, commencing 5.30 pm on Wednesday 27 November. If you’re in the area I’d love to see you there. 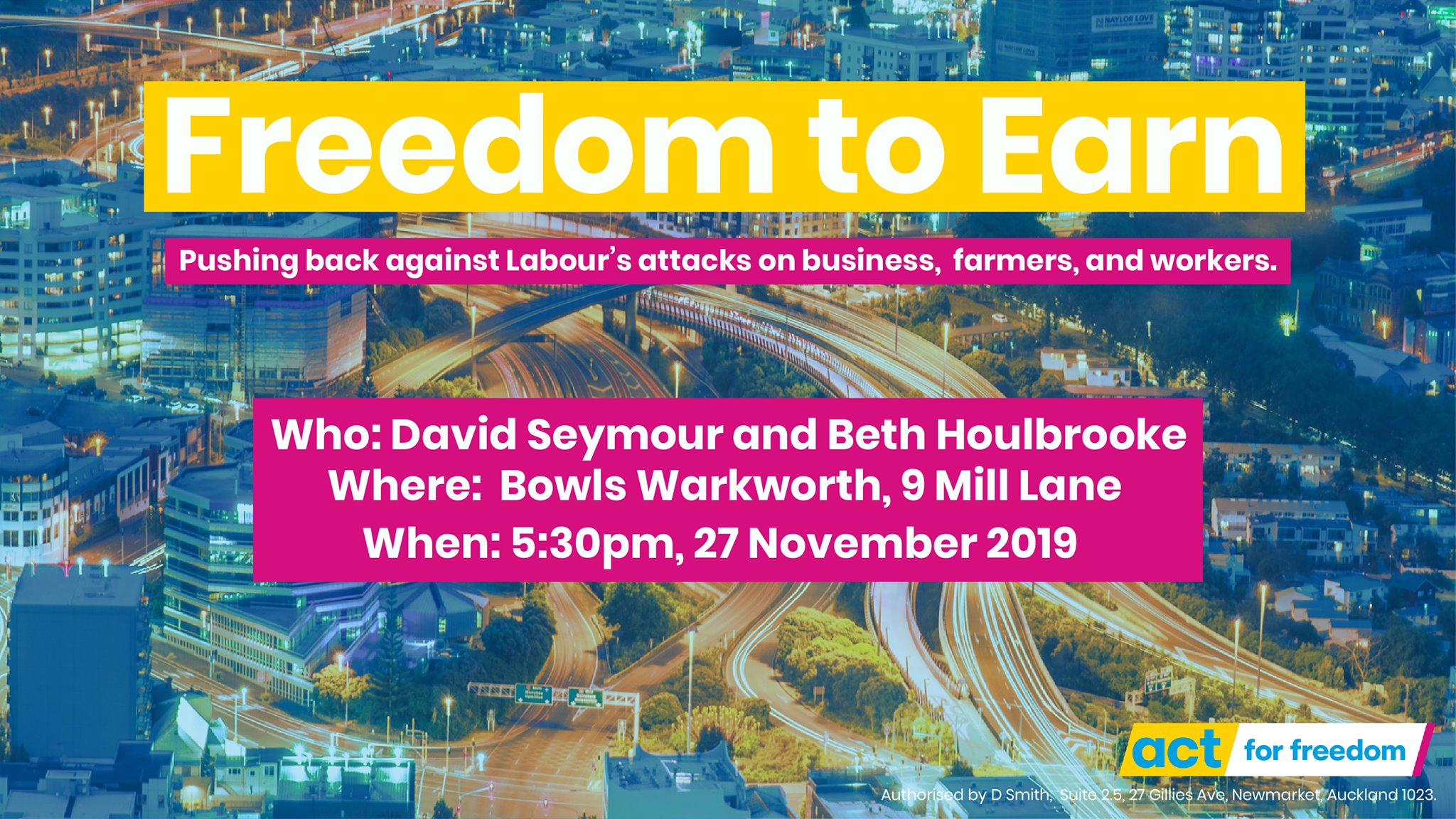